Coming to grips with my white privilege, ignorance and by default colonial world view, as well as my respect and honor for the Indigenous Water Protectors of Standing Rock, I’m totally motivated now.  I’m determined to increase my empathy, understanding and intend to do more, a lot more,  than walk a mile in Lakota moccasins.

Step one, watching ‘Oliver Stone’s Untold History of the United States’ documentary film.  Stone’s film begins with the no doubt preventable rise, seductions and atrocities of Hitler.  The sailor kissing his gal in Times Square poster, Casablanca,  Rogers and Hammerstein’s South Pacific… such defined my childhood narrative: happy music, romance and dancing around the subject.  One year I even played the lead role, Maggie, in South Pacific.

“I’m gonna wash that man right out of my hair and send him on his way….

“Bali Hai will call you….Talk about things you like to do.  You got to have a dream.  If you don’t have a dream, how you gonna make your dreams come true.”

In school we heard about the tragedy of Pearl Harbor and the power of the United States of America stopping the Japanese at Hiroshima.  We learned about Churchill and Roosevelt,  D-day and victory over Nazi Germany.   We heard about soldiers giving chocolate to children liberated from concentration camps, victory gardens and rebuilding Europe.

Many history lessons, all from the victors point of view. Not really part of my world.

A decade older I did meet a Japanese survivor of Hiroshima, peace championing. Still, my general narrative centered around an allied victory over Nazi Germany. Without tangible memories, WWII remained mostly a backdrop for my favorite musical.  Sad but true.  Slowly I began to hear testimony, visit the Holocaust Museum and more fully examine pure evil and learn from the mistakes of recent history.

In Episode one of ‘The Untold History of the US” Stone does a brilliant job with unraveling global interests around The Spanish Civil War.
Watching the episode invoked one palpable, quite personal memory. 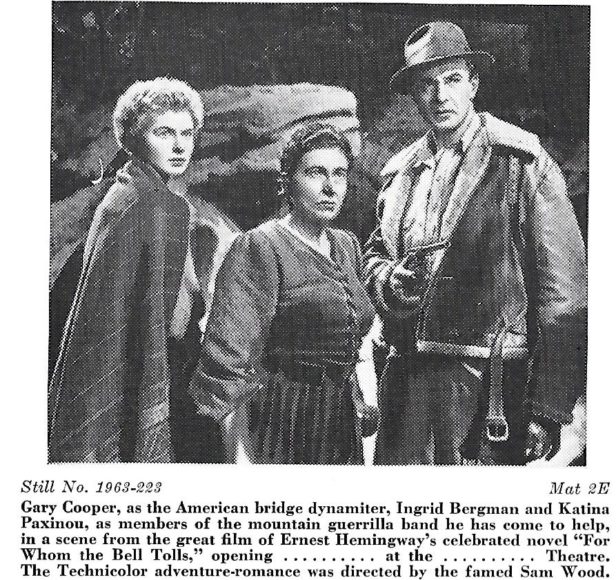 It was a crisp fall evening in Madrid 1996. That evening, on a balcony overlooking the city, I crossed paths with Fernando, a well travelled professor of hydrology. He was exuberant.  In the distance a sound of singing, “No Nationalismo, No Sexismo, No Racismo” echoed from the massive Madrid Stadium.  The view directly below the balcony, the street,  was a sea of gray haired veterans, many in wheelchairs.  The veterans had come from  50 countries, a few from as far as Australia to fight for Spain’s democracy over fifty years before.  It was a global reunion of the international brigade of soldiers in the Spanish Civil War.

Despite being a student in International Relations, I’d yet to fully understand the significance.

Years later in Barcelona, a last stronghold in The Spanish Civil War, I befriended Conchita, a spry lady in her late 70s who told dirty jokes, lived in a neighboring apartment and took pride in her daily mopping of our apartment building’s five flights of stairs. One day she told me a bit of her story.  A young girl with a family too poor to flee their fishermen’s village, Conchita said that when the bombs dropped everyone hid.  So she took advantage of the situation, running around the block to take suddenly unattended food for her family.

What does this have to do with Standing Rock?

Both are proxy warfare scenes of progressive vs fascist forces. Both were battles for indigenous people to speak natives tongues, for agreements to be upheld; Spain’s being democracy, Standing Rock’s, treaties. Just as the supporting Spain’s Republic, Standing Rock’s Water Protectors are without economic motives of extraction or conquer. Rather, the Water Protectors are brigade volunteers sacrificing time and resources for a cause beyond their own interest.

Short term profits for the few vs water and health for all.  Spain’s Civil War, Standing Rock Water Protectors, there is a glaring resemblance. What’s on the line is the bottom line.

Standing Rock is the largest gathering of tribes in US history.  Standing Rock banding together has grown quickly from Seven Council Fires Camp, whose firepit was officially extinguished on 12/12/2016  into the All Nations Camp complete with a new fire pit.  Indigenous rights is the headwaters, the movement is the river.  The movement that stands for justice, for a sustainable future, for water is life, for treaty rights, for the right to peacefully assemble, for free speech, for liberty and happiness.

Likewise, progressives and intellectuals from every country with democratic constituents came to support Spanish freedom from Franco’s rule. The republic lost to Franco, leaving Spain in a military dictatorship for three and a half decades.

An artful scene from Ernest Hemingway’s 1940 film, ‘For Who the Bell Tolls’, reminds us that while the republic was assisted by volunteers, Franco was far from alone.  Indeed it was not won by him.

What’s Oil Politics got to do with it?

“No corporations have been more aggressive in forging their own foreign policies than the big oil companies.” (1)

With the US deeply isolationist, crippled by the depression and freshly exhausted from WWI, it joined conservative UK in barring supplies to the Spanish Republican freedom fighters. However, the US did not stop Texas’ Texaco Oil from feeding a steady fuel supply to fascist Franco’s troops.

“He always thought it was much better to deal with autocrats than democracies,” a friend said of Rieber. “He said with an autocrat you really only have to bribe him once. With democracies you have to keep doing it over and over.”

“Merchants have no country,” wrote Thomas Jefferson in 1814 (2). “The mere spot they stand on does not constitute so strong an attachment as that from which they draw their gains.”*

Standing Rock inspires my reflections of recent history, of The Spanish Civil War and Franco, of WWII and Hitler, of The United States of America and the current political climate.

Today it’s the Chinese owned tar sands oil destined to pump through Dakota Access Pipelines, primarily for export sales. The plan is high risk, to transport tar sands oil, a mucky mess and expensive to refine, to a U.S. port for shipping and sell abroad. There is no domestic benefit, period.  There is great domestic risk and horrific liability. Pipeline industry standard, understood by design, is there always is a bit of constant leakage and thus, slight and mostly undetected contaminations.  This is understood.  The industry does not consider leaks a proper “spill” unless the pressure of the leak reaches a certain level and sets off an alarm gauge.  Like the most recent spill just discovered 150 miles from Standing Rock.  A farmer spotted the black ooze across his land and stream, over 15,000 gallons contamination.  And what of the spill gauge?  Malfunction which seems too common and too important a gauge to not function properly.

This is where the movement of movements comes in. Not an organization or a religion. Not any kind of ism. A mass collaboration of all conscious beings, fueled by common sense, spirit and  heart. Courageously seeking higher truth, standing together for higher truth and common sense. Acting  with love for the 7th generation, for today and with love of all life. Without clean water there is no life.  Water is life.

What then is the truth we act upon?

Episode 2 of Stone’s documentary film presents the untold history of how Truman became president of the United States and the immediate, resultant crash of diplomacy with Russia.

Oliver Stone explores the alternative candidate, Henry Wallace, former VP of Roosevelt.  What if Wallace had won – would the bomb had been dropped on Hiroshima? Might we all have skipped the cold war?  In which case, would science, technology and world peace been spread around the world more equitably? 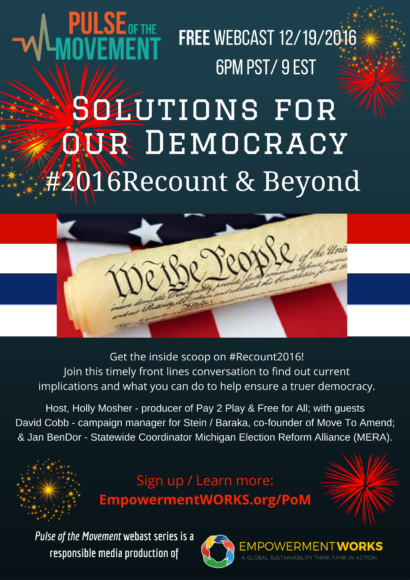 What kept Wallace off the ticket against popular demand was the sway of special interests–it’s what killed the electric car, my own father’s invention of a cleaner turbo, hemp, tesla’s free energy and so much more.  It’s what Standing with Standing Rock is all about, we the people standing together for the common sense, common good and without fiscal special interests.  Water is life.

Give a hoot, don’t pollute, every child understands. Imagine the limitless possibility of unfettered altruism and creative genius to bless the common good.

Imagine all the people living in a world of peace.  You may say I’m a dreamer.  Well I’m not the only one.  I hope one day you will join us.  And the world will live as one.”

Don’t miss our December Pulse of the Movement Webcast, “Solutions for our Democracy: Recount2016 & Beyond”!   EmpowermentWORKS.org/PoM