Reflections on the Road in Zimbabwe on the way to Nepal…
By Melanie St.James, edited by Melody Joy

Arrived in South Africa in time for a marvelous New Year’s Eve dinner with mentor Scholastica Kimaryo (left) and Ms. Thoko Majokweni, new collaborator, friend, and Advocate. It’s my pleasure to introduce you all to soft spoken powerhouse, Thoko (right). She’s a forerunner in her design, development, and implementation of, to quote the UN, “…the best model to transform sexual assault globally.” Stay tuned for her interview in our March webcast! 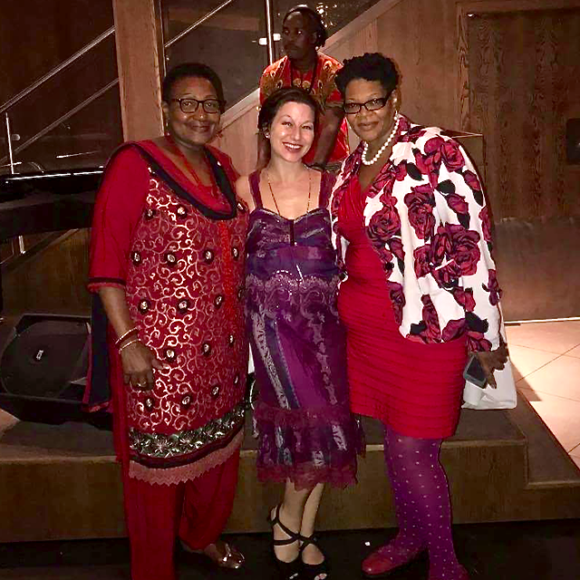 Scholastica, ever inspirational, shared that she enjoyed a birthday meeting with the head of the African Union, Nkosazana Dlamini-Zuma which turned out to be a historical event. While sharing birthday cheer, the ANC Women’s League announced Nkosazana as their Presidential pick for this year’s election. WOW!!!!  Interesting to note, if the 2017 Presidential election winner, she would replace her ex-husband, Joseph Zuma. All this just 20 years after the end of apartheid.

What progressive change is in the South African spirit and what an honor for us to feel the pulse of the movement. I’m so grateful to begin 2017 with great news!

After a short flight north I landed at Harare International, Zimbabwe. It’s been 17 years since my first visit here. Also compared to JoBurg, the contrast is gaping and continues to expand.

As late as 2000 Zimbabwe boasted the reputation as a breadbasket of Africa: economically thriving, culturally diverse, backpacker haven, teaming with creative expression and success stories in locally led sustainable development.

Celebrated as the hero of Zimbabwe’s independence, in 1980 beloved President Mugabe stewarded a velvet transition from white run Rhodesia to parliamentary democracy. Two decades later, among increasing corruption scandals, his opponents began to quietly die in unusual car accidents. February 2002, the month I came back to begin EW’s community orphan care and HIV prevention projects here, marked the most violent year and in fact season of political murders. And a fairly unfair election ensued. 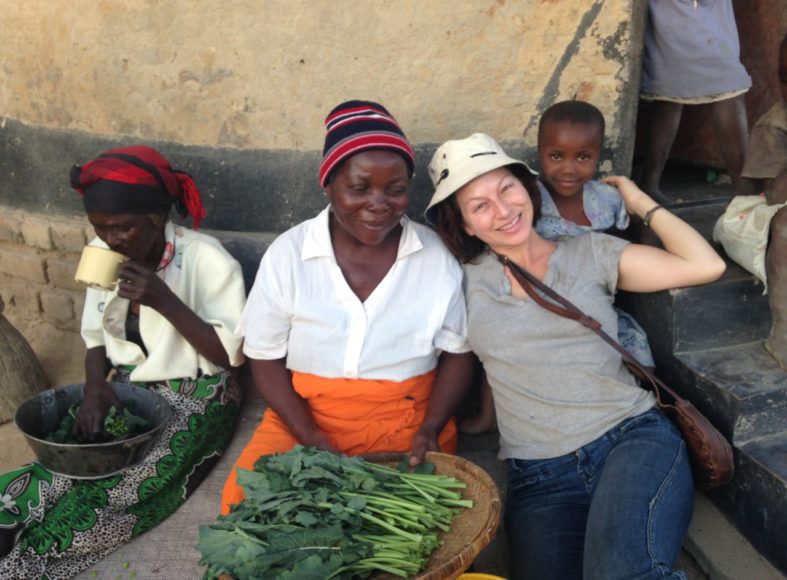 The end of Democracy was justified by goal of land reform. Thriving, centuries old farms were seized from white residents. 3am inquiries of the ruling ZANU PF party card led to countless beatings. Terror was in the air for people of all colors. Today, two parallel economies exist, haves, and have nots.

At the hight of the AIDS epidemic here, over 30% of the adult population was weakened with HIV/ AIDS. Falling wages with hyperinflation, hyped up government media on every platform, and voices of resistance slowly suffocate under fear of persecution.  When the people needed cogent policies most, they lacked the physical (and moral) strength to demand it. Now, what’s louder than the outcry of injustice is the sigh of resignation.

The extraordinary heroes of Zimbabwe are the moms like my medicine making friend Chinoso (center) here, who courageously raises ten children and cares for her 93 year old mother (same age as president Robert Mugabe fyi).  Growing subsistence Tobacco on a small plot which was on a white owned farm, she may in fact be one of the success stories of the long-awaited land reform.

I invite you to consider not what we see we need to fix, but imagine how precious democracy is, and what we’re striving to protect. Left to the abuse of power, it can and will fall apart.  Liberty and Responsibility are folds in the same blanket. 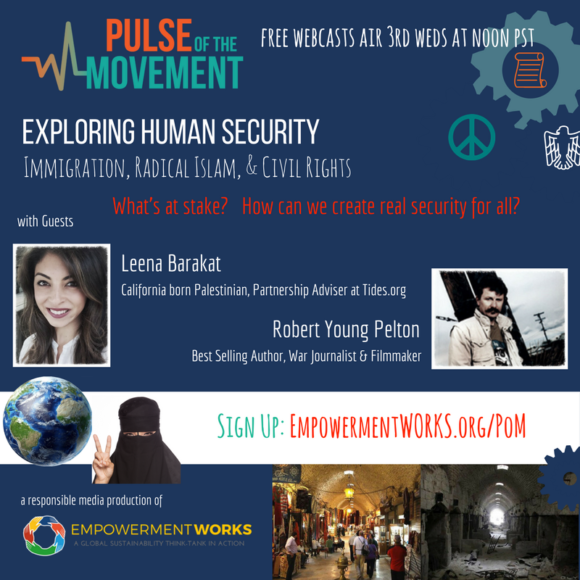 At the center of our responsibility is our mass-culture and how we maintain its vital values. Truth in media, ethical journalism, freedom of the press, individual freedom of speech, minority rights and of dissent. There are plenty of petitions from movements: MoveOn, SumOfUs, CREDO Mobile, Democracy Now, and more. Explore, sign a petition, call your senator, write your representative, talk to someone, make your voice heard. This is everyday democracy and its beautiful. Especially now, how beautiful it is to begin 2017 aware, motivated, and willing to exercise democracy. Consider yourself empowered to go deep this year.

Deepen awareness, keep perspective, balance fear hype distractions, and stay on point with our own best choices and voices of freedom.

Please enjoy our January Episode, “Exploring Human Security: Immigration, Radical Islam, & Civil Rights” presenting three unique empowerment voices: 1) world famous Conflict Journalist & Author Robert Young Pelton, 2) a California-born Palestinian mother and social change leader, and 3) a Military Strategist & Intelligence expert (via article in this Blog). Check it out and tell us what you want to see next on Pulse of the Movement. 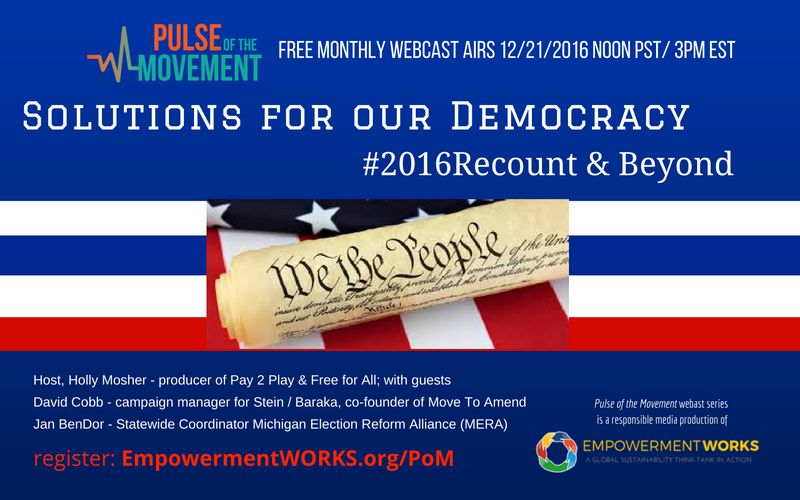 Zimbabwe’s path has been a marker, inspiration, and reflection point of purpose for the creation of Empowerment WORKS. Within the context of EW’s evolving mission, it offers a mirror to the world. Zimbabwe is the best of humanity in it’s people’s gentle resilience to all that can go wrong when a once vibrant democracy stumbles into drunken depths of oppression.

Called to witness the#2016Recount in the USA, Empowerment WORKS dedicated Pulse of the Movement’s December 2016  to “Solutions for our Democracy” hosted by Filmmaker for Change, producer of Free for All.