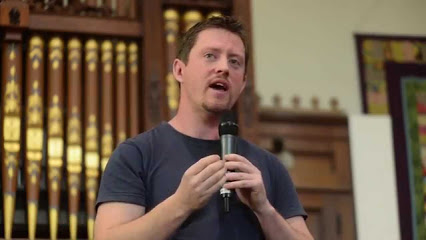 “A friend once visited a remote village in Africa. In this village people wore indistinguishable clothing and lived in similar looking homes. Two people, however, had distinct markings on their foreheads and huts. They were treated with an unusual amount of respect, although they didn’t appear to be making decisions for the group. In fact, no governance or power structures were apparent within the community at large.

After three days of failed guesswork, my frustrated friend asked a translator to find out the nature of the group’s dynamics. The villagers responded: “In our society, we don’t have forms of hierarchy as you may know them. But we have a rule: when anyone reaches a certain level of ‘wealth’, they throw a feast until they become ‘poorest’ and then they get the marking on their forehead and home as an eternal sign of respect.”

I since discovered this widespread practice across indigenous cultures has been named a potlatch; in its common Western form: the potluck – although with somewhat less inbuilt wisdom regarding redistribution. What a brilliantly strategic, non-destructive way of engaging with ego, I thought. Hence, it has become one of my favourite examples of what we at the Post Growth Institute call ‘post growth in action’ – things that are already defining futures independent of economic growth. There sure are a lot of these things, and they don’t necessarily fit into your typical ‘sustainability’ box. Here’s a quick look around the world at some inspiring forms of post growth in action.

There are timeless Philosophies, such as the Ecuadorian Sumak Kawsay that explores alternatives to Western-style ‘development’ through the indigenous belief that well-being is only possible within a community, with that community including Nature.

There are influential Principles, such as Qard al-Hassan which, drawing from Islamic Shari’ah law, prohibits the payment and collection of interest (riba) in any loan or gratuitous offering.

There are inspiring Indicators, such as Bhutan’s Gross National Happiness, whereby the happiness and satisfaction of Bhutanese citizens, measured biennially, drives and informs all government policies. Widespread adoption of the indicator was recently supported by United Nations Secretary General, Ban Ki-moon, and has already influenced practices in places such as the United Kingdom and the U.S. State of Vermont.

There are appealing Activities, like buycotts, whereby communities ‘auction’ their patronage to the businesses that promise the greatest commitments to making socially responsible changes to their work environments and practices. The activity was made famous by the Carrotmobcampaign which saw community bargaining with 23 liquor stores result in the winning business allocating 22% of its income to an energy retrofit of its workplace.
There are ground-breaking Legal instruments, such as Bolivia’s Law of the Rights of Mother Earth that provides natural systems with rights that, in modern law, are commonly ascribed solely to humans, thereby creating the ability for such rights to be legally defended.

There are rewarding Livelihoods, such as those of doulas who ensure mothers feel safe and confident before, during, and after childbirth.

There are impressive Lifestyles, such as locavoring in which people seek to eat only local produce. A type of event has subsequently emerged that requires produce come from within a certain radius – 50 miles, for example.

There are remarkable Technologies, such as hexayurts that offer simple, low cost, easy to erect shelters to house humans in need. The designs are open access and the yurts can be built anywhere in the world using local materials.

There are powerful types of Software, such as Skype that allows over 600 million users to communicate freely, with others around the world. It’s a technology we at the Post Growth Institute use in an exciting way for our team collaboration.

There are engaging Facilitation Techniques, such as sociocracy which allows participants in a discussion to position themselves on issues using a physical spectrum (a line or series of concentric circles, for example). By expanding the simple ‘for’ or ‘against’ model, those involved may gain important insights from marginalised perspectives and/or those previously marginalised may feel heard enough to comfortably move on the spectrum to enable consensus.

There are valuable Natural Phenomena such as the sun’s seasonally shifting trajectories in relation to the earth that enable things like passive solar design. Here, simple architectural practices can ensure the entry of the sun’s heat into a structure is reduced in the warmer months and increased in the colder months.

There are common sense forms of Infrastructure, such as seed libraries that enable the public to access seeds for sewing crops, with the expectation that any propagated surplus will be returned to the library.
There are useful Online Platforms, such as Freecycle where over 8 million users, across 85 countries, are able to offer free items to or request free items from their local community.

There are heartening International Movements, such as La Via Campesina in the Global South – 200 million peasants, small and middle-scale producers, agricultural workers, rural women, and indigenous communities that promote the right to produce food on one’s own territory – and Transition Towns in the Global North – 1000 registered initiatives across 34 countries that work locally to rebuild resilience and reduce CO2 emissions partly via the creation and active embodiment of an Energy Descent Action Plan.

There are fascinating International Programs, such as the ManKind Project that has provided liberating initiation rites for over 40,000 men, drawing on wisdoms from many ancient and modern traditions.

There are imaginative International Events, such as Park(ing) Day in which people collaborate to ‘temporarily transform metered parking spaces into ‘PARK(ing)’ spaces: temporary public places’ that may include grass, chairs and other forms of activities.

And there are exciting Places, such as the Factor e Farm in rural Missouri where people using scrap metal and open-source design to build the 50 basic machines that can ensure appropriate, local manufacturing.

Combined, these examples remind me that ‘post growth’ futures are already here, they’re just not evenly distributed. What you might be living, with respect to your food production for example, might be part of my future in ten years. That is, we can move beyond talk of starting the transition; we’ve been transitioning all along, and if we want to evolve a new meta-narrative, isn’t it more empowering and inclusive to ground it in existing practice?

Adam Smith seemed to believe so when he drew together his defining principles for a capitalistic system. He didn’t put out a vision for how the world should be. Rather, he described a series of tenets that underlay existing forms of organisation that he believed worthy of further support. The same inductive method could help us identify and nurture an abundance of hopeful, present realities that show paths to futures beyond economic growth. Shortly we’ll be sharing an initial 5000 of these realities via our newest project: How, on Earth.

Yet, whilst existing realities can provide important evidence of our ability to flourish in ‘post growth’ ways, one central ingredient for post growth futures appears to remain missing: a non-accumulative macroeconomic framework that is incentivised for innovation, creativity and flourishing. That is, a galvanizing economic framework for how we justly and sustainably converge towards a global steady state economy. An ambitious undertaking, for sure, but one in which we at the Post Growth Institute are presently engaging through our Not-for-Profit World project.

And when I think of the challenges ahead, I remind myself of the words from one of my favourite thinker-doers, Stuart Hill. Stuart believes we move through three phases in any challenges we collectively face. The first is deceptive simplicity – we think something is super easy; if we just throw money, technology or time at it, we’ll fix it. The second phase is confusing complexity – we begin to think the challenge has been underestimated. More research is needed. Committees must be formed! Even more research is needed!! But then, Stuart says, we evolve to the third, most heartening phase: profound simplicity.

Here we experience ‘aha’ moments, now knowing that there were always alternative paths offering great clarity, with ease. When I consider the potlatch and the multitude of other things ‘post growth’, that’s when I sense we are bathing in profound simplicity, revelling in the beauty of dynamic fruition that speaks to our hearts and souls in ways that make a much deeper sense.